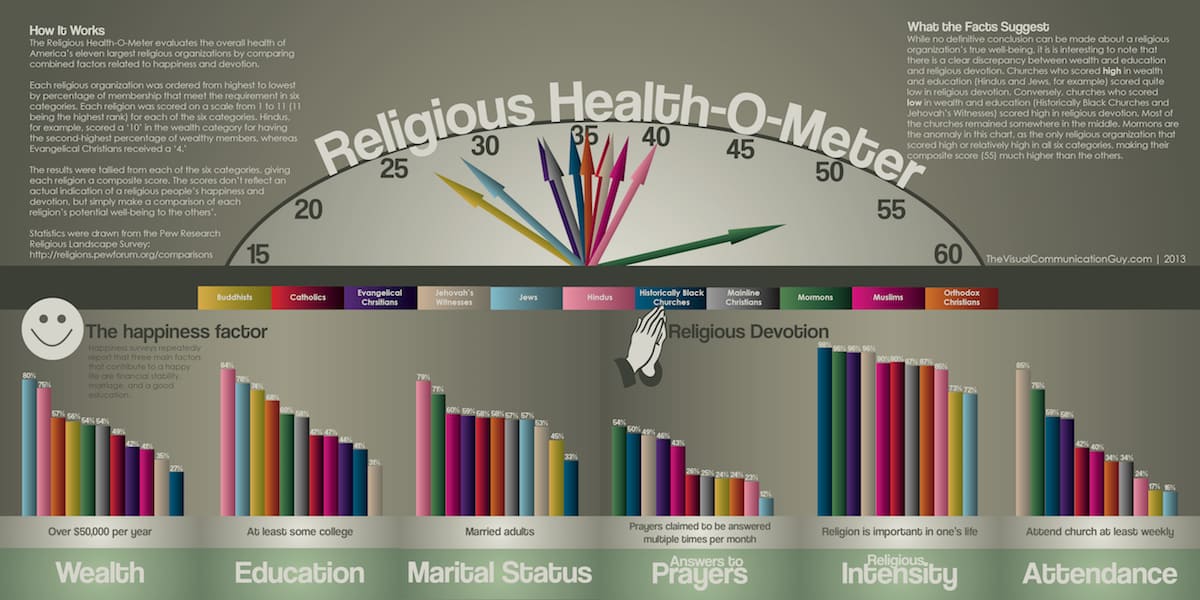 Does being religious or devoted to a specific religion give you special benefits in this world? According to the Religious Health-O-Meter the answer is YES. They evaluate the overall health of America’s eleven largest religious organizations by comparing combined factors related to happiness and devotion.

Each religious organization was ordered from highest to lowest by percentage of membership that meet the requirement in six categories. Each religion was scored on a scale from 1 to 11 (11 being the highest rank) for each of the six categories. Hindus, for example, scored a ‘10’ in the wealth category for having the second-highest percentage of wealthy members, whereas Evangelical Christians received a ‘4.’

The results were tallied from each of the six categories, giving each religion a composite score. The scores don’t reflect an actual indication of a religious people’s happiness and devotion, but simply make a comparison of each religion’s potential well-being to the others’.

Important Editor’s Note:
While this infographic has interesting statistical value in the ordinal data in the bar graphs at the bottom, it is important to note that no real statistical comparison can be made between the religions using such data. The “Health-O-Meter” was intended by the author to point out an interesting, albeit superficial and statistically non-significant trend: that some religions score high in particular categories and low in others, and some high in all or low in all. But no real conclusions can be drawn about any religion’s “health” nor their actual statistical relationship to other religions with the data being used. The viewer is advised to draw their own conclusions about what the ordinal data might actually suggest. And, as the infographic suggests, readers are strongly encouraged to visit the original data, from the Pew Research Religion Landscape Survey.