With President Thomas S. Monson passing, Elder Holland and less senior apostles increase their probability of becoming President. Remember, Monte Carlo simulations like this one are based on randomness so there may be changes to the projections that are do to randomness and are not related to President Monson’s mortality. The updated plot has a New Apostle placeholder with an assumed age of 70 years. A new plot shows the overlap between the original and updated probability curves. Also, the table below has a new column “Prob. Change” that shows the percentage point difference in “Prob. President” from this update.

These projections are one actuary’s forecast of how the future presidents of the Church of Jesus Christ of Latter-day Saints will play out. Outside of the Godhead, the hierarchy of the Church is lead by 15 apostles, the most senior apostle being the president. These apostles are ranked in order of seniority. The person who has been the apostle the longest is the president. When the current president passes, the next most senior apostle becomes president. Note, that succession is by seniority (not by age), but, moving up in seniority is tied to death, which is correlated with age. So, age gives us information on who is likely to live long enough to become president. This process gives God a whole lot of variance work within future lifetimes. If He wants you as President, you will live long enough to get there. To learn more, you can visit www.lds.org

The science behind the forecast

Actuaries are statisticians that specialize in risk management. Traditionally, you will find actuaries working in the insurance industry, like life insurance, which deals with the probability of death. Life insurance actuaries use tools called life tables to calculate mortality probabilities. Using a modified life table from the Society of Actuaries and deploying similar techniques as life insurance actuaries, I wrote a simulation that looks at the expected life spans of our apostles and how it affects the probability of them living to be the president of the Church. You can see the 2015 simulation results here, and the 2017 results are this post (I skipped 2016).

The simulation is written in the statistical programing language R. The simulation steps through each future year and it estimates mortality based on life tables. If the president of the Church or any of the apostles die then the simulation updates all the seniority ranks and continues the simulation forward until the year 2040. This entire process is repeated tens of thousands of times, and the results are recorded and aggregated into the summaries above.

R is an open source statistical programing language that can handle data between basic plotting to contemporary machine learning algorithms. I have been using the same R code since 2012 to run this simulation. This year, I rewrote the code, still in R, but using newer techniques. I also moved the plotting and post-simulation calculations from Excel into R (Thanks, R for Data Science). 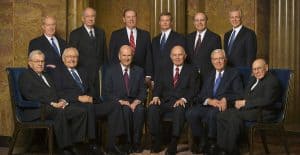