We aren’t fighting against Satan, but this one thing

We aren’t fighting against Satan, but this one thing 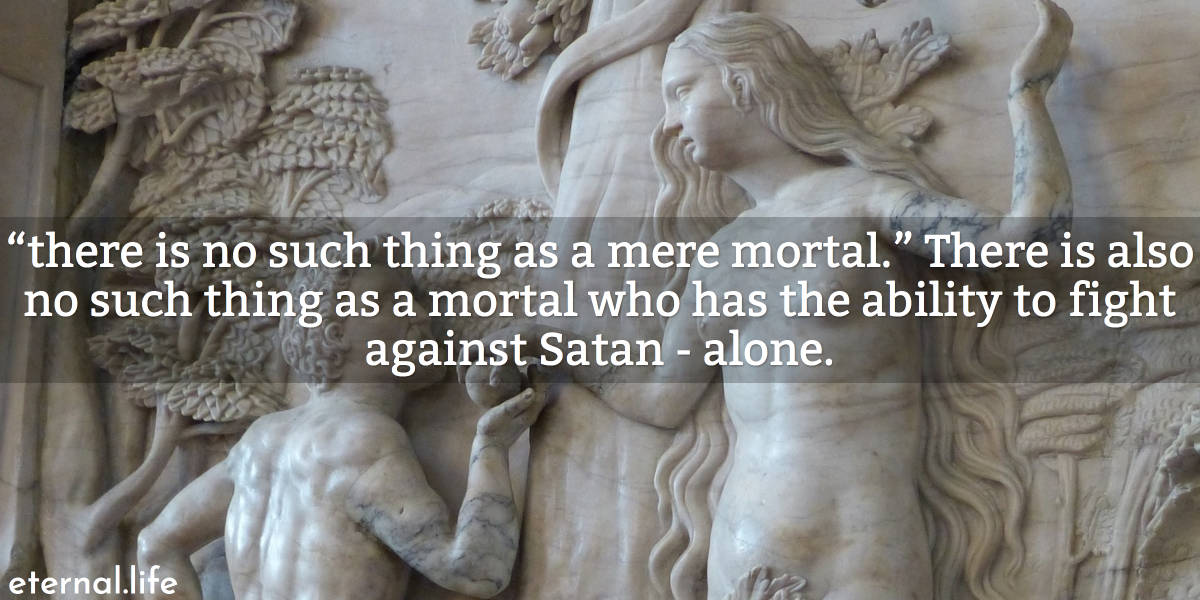 C.S. Lewis said, “there is no such thing as a mere mortal.” There is also no such thing as a mortal who has the ability to fight against Satan. We don’t have to and we certainly can’t do it; alone. It should comfort you to know we don’t have to fight against satan, only againstthe satanic, evil, and corrupt influences in our lives. We are facing bits of evil influences with bits of heaven, “by small and simple means.”

We are hit from two sides (1) tempted by Satan [TBS] and (2) tried by God [TBG] – which gives God the allowance of #1 – think about the life of Job. We experiences “times and seasons” of various influences in our lives. The curriculum in life is custom to each of us. So, there are times when different devils will come to “try and test you” and eventually throughout your life “in all things, to see if you will endure the crosses of the world and remain true and faithful.”

No one is confronted with the full-frontal of evil, at least not all at once. When various evil influences come into your life, you are called upon to use your moral agency, mortal help from others, life experience, and all the help you can call down from Heaven to help you in your battle against the belligerent evil. There may be one or a small handful or moral, mental, physical, or spiritual challenges on your battle front at any given time. But you are never at the battle front alone one on one with Satan. We can’t even comprehend all the evil, let alone all the good, nor are we called to.

“A man is saved no faster than he gets knowledge.”

We have to fight continually as it were sword in hand to make the spirit master of the tabernacle or the flesh subject to the law of the spirit. if this warfare is not diligently prosecuted then the law of sin prevails…

The rule of the flesh brings darkness and death, while on the other hand the rule of the spirit brings light and life. When through the gospel, the spirit in man has so subdued the flesh that he can live without willful transgression the Spirit of God unites with his spirit they become congenial companions and the mind and will the creator is thus transmitted to the creature. Did Their spirits have their choice there is not a son or daughter of Adam and Eve on the earth but what would be obedient to the gospel of salvation and redeem their bodies. But there is a constant warfare between them still they must remain together be saved and exalted together or neither of them will be saved and exhaled with the salvation and exaltation which the gospel offers. Brigham Young, Journal of discourses 9:287

“The greatest test of life is to see if we will hearken to and obey Gods command in the storms of life. It’s not to endure storms, but to choose the right while they rage. The tragedy of life is to fail in that test and fail to return back to our heavenly home. It will take unshaken faith in Jesus Christ… It is critical to have this faith long before Satan hits us with doubts and carnal desires.” Henry B. Erying