The meanest man that ever lived Saved her

The meanest man that ever lived Saved her

A determined pioneer girl named Agnes Caldwell and her wise wagon master have something to teach us about climbing the (our) mountain of the Lord.

Agnes was nine years old in October of 1856 when she and the rest of the Willie Handcart Company were wading through the wind-driven snow on the high plains of Wyoming. As they camped for the night at the sixth crossing of the Sweetwater, the snow was getting deeper, their rations were desperately meager, and Rocky Ridge was still ahead. Near sundown the next day, the relief party from the Salt Lake Valley would appear on the western horizon coming toward them.

Before the storm hit, Agnes had been taking each mile of the autumn trail in stride, even the one that had been strewn with rattlesnakes. For that mile, she and her friend Mary had held hands and jumped again and again over the snakes until they were out of danger, mercifully unharmed.

But after days of dragging her nearly frozen feet through the deepening snow, Agnes wasn’t skipping anymore. And she was literally starving. The death toll in her company was rising with every passing night. Yet, of the arrival of the relief party, all Agnes records in her understated history is, “It certainly was a relief.” And then she describes her own rescue:

The infirm and the aged were allowed to ride, all able-bodied continued to walk. When the wagons started out, a number of us children decided to see how long we could keep up with the wagons, in hopes of being asked to ride. . . . One by one they all fell out, until I was the last one remaining, so determined was I that I should get a ride

After what seemed the longest run I ever made before or since, the driver, [Brother] Kimball, called to me, “Say, sissy, would you like a ride?” I answered in my very best manner, “Yes, sir.” At this he reached over, [took] my hand, [then clucked] to his horses [which made] me run, with legs that seemed to me could run no farther. On we went [for what] seemed miles. . . . [I thought] he was the meanest man that ever lived or that I had ever heard of, and other things that would not be a credit . . . coming from one so young. Just at what seemed the breaking point, he stopped. Taking a blanket, he wrapped me up and lay me in the bottom of the wagon, warm and comfortable. Here I had time to change my mind, as I surely did, knowing full well [that] by doing this he saved me from freezing [to death].

At first Agnes thought Brother Kimball was “the meanest man that ever lived” because, instead of swinging her up into his wagon as an act of tender mercy, he signaled his team to go faster, forcing her into a run. This run—this severe mercy—increased her circulation, which saved her life.

Why does God let things happen to us﻿? 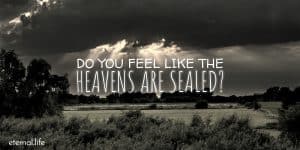 Do you feel like the heavens are sealed? That God is silent?

To live greatly, we must develop this capacity