Leaders never tell us what to do, they teach us what we can become

Leaders never tell us what to do, they teach us what we can become 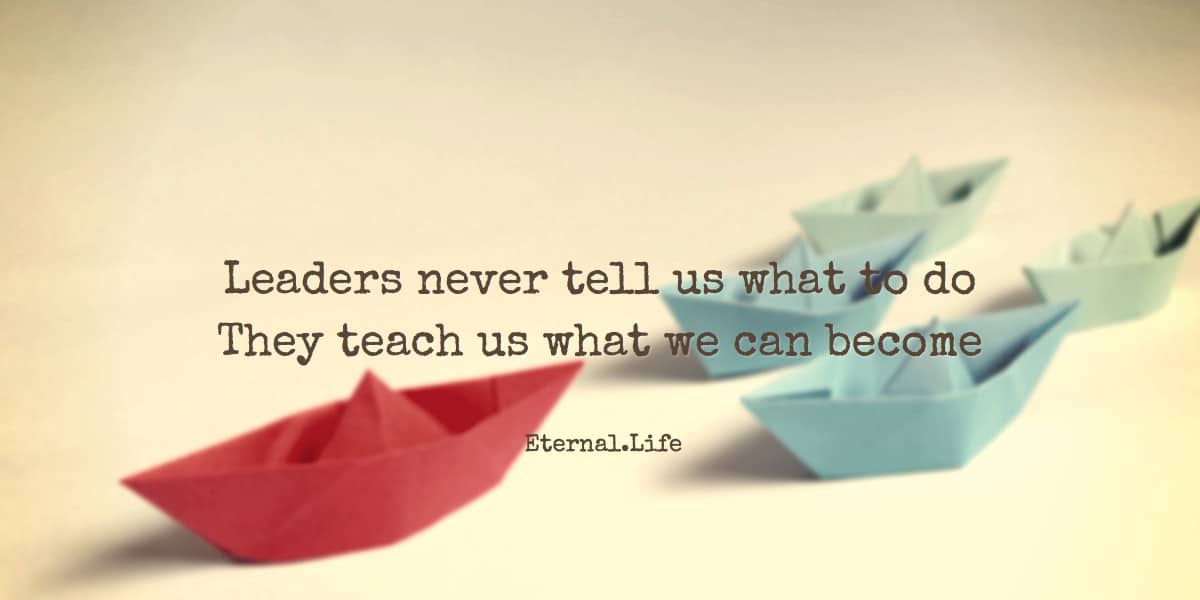 The Church of Jesus Christ is a voluntary organization. Whether you’re a minister or a simple mortal we decide ourselves to serve, be served and work out our salvation as part of Christ’s Church. We are all volunteers, but the trend I too often see of criticizing, condemning and complaining about what is or isn’t said by leaders of the church highlights the lack of understanding and agency.

The underlying belief behind the troubling trend is the false premise that, “our leaders are telling us what to do.” No one likes to be told what to do or what to think. It doesn’t matter if you’re a little child or a companion in a marriage. It’s human nature to resent and revolt at being told anything. I have come to learn that:

Leaders aren’t telling us what to do, but teaching us correct principles. They are teaching us principles on who we can become. We choose for ourselves what the application is in our lives.

A lack of understanding

It’s understandable, although not acceptable, that people would get upset about what is or isn’t said. Most people are used to other people telling them what to do, yelling at them when they don’t do it or even don’t do it the way they wanted. It’s a daily routine of “push me, pull you” in home and work life for those who haven’t taken charge of their life. Much like Dr. Dolittle’s character the pushmi-pullyu. When we approach the church, sermons, and leaders in this light we resent them for telling us truth we might already know, are striving or struggling to live, or even disagree with. I’ve also heard many time, “they should talk about,” “why aren’t they mentioning…” We mentally remove our agency to listen, understand, and apply what is being taught. Isaiah explained the reason and remedy best:

“They also that erred in spirit shall come to understanding, and they that murmured shall learn doctrine.” Isaiah 29:24

Fundamentally, we display the same lack of understanding (really a mindset) and murmuring as did Nephi’s brothers Laman & Lemuel. For they did “murmur in many things… because they knew not the dealings of that God who had created them.” 1 Nephi 2:11-12

“Recall how Nephi desired to know about the things his father, Lehi, had seen in the vision of the tree of life. Interestingly, the Spirit of the Lord begins the tutorial with Nephi by asking the following question: “Behold, what desirest thou?” (1 Nephi 11:2). Clearly the Spirit knew what Nephi desired. So why ask the question? The Holy Ghost was helping Nephi to act in the learning process and not simply be acted upon. Notice in 1 Nephi 11–14 how the Spirit both asked questions and encouraged Nephi to “look” as active elements in the learning process.

A learner exercising agency by acting in accordance with correct principles opens his or her heart to the Holy Ghost and invites His teaching, testifying power, and confirming witness. Learning by faith requires spiritual, mental, and physical exertion and not just passive reception. It is in the sincerity and consistency of our faith-inspired action that we indicate to our Heavenly Father and His Son, Jesus Christ, our willingness to learn and receive instruction from the Holy Ghost. Thus, learning by faith involves the exercise of moral agency to act upon the assurance of things hoped for and invites the evidence of things not seen from the only true teacher, the Spirit of the Lord.” Elder Bednar, Seek learning by faith

In simplicity Stephen Covey says this lack of understanding comes when:

“people are active in the church, but not the Gospel.”

We are not to be passive people sitting in the pews, but active participants in the gospel in our own lives. God doesn’t save churches, he save souls. That soul is yours along with the agency to decide where you are, what you listen to and do, and ultimately who you become. In short, we are to get our own PhD in the gospel.

Be agents unto yourselves

1/3 part of the hosts of heaven decided to not decide any more. They disobeyed Father, choose Lucifer’s plan and gave up their agency D&C 29:36 But we, the righteous and valiant children of God, were sent to this earth to be agents unto ourselves, to act and not to be acted upon. We have the ability and responsibility to continue using our moral agency (not free agency) to choose.

John Taylor, the third President of the Church, reported: “Some years ago, in Nauvoo, a gentleman in my hearing, a member of the Legislature, asked Joseph Smith how it was that he was enabled to govern so many people, and to preserve such perfect order; remarking at the same time that it was impossible for them to do it anywhere else. Mr. Smith remarked that it was very easy to do that. ‘How?’ responded the gentleman; ‘to us it is very difficult.’ Mr. Smith replied,

‘I teach them correct principles, and they govern themselves.’

Brigham Young, the second President of the Church, reported: “The question was asked a great many times of Joseph Smith, by gentlemen who came to see him and his people, ‘How is it that you can control your people so easily? It appears that they do nothing but what you say; how is it that you can govern them so easily?’ Said he, ‘I do not govern them at all. The Lord has revealed certain principles from the heavens by which we are to live in these latter days. The time is drawing near when the Lord is going to gather out His people from the wicked, and He is going to cut short His work in righteousness, and the principles which He has revealed I have taught to the people and they are trying to live according to them, and they control themselves.’”

This teaching, not telling, of agency is foundational, simple and a basic tenant of God’s plan:

We claim the privilege of worshiping Almighty God according to the dictates of our own conscience, and allow all men the same privilege, let them worship how, where, or what they may. Article of Faith 11

“In relation to the power over the minds of mankind which I hold, I would say, It is in consequence of the power of truth in the doctrines which I have been an instrument in the hands of God of presenting unto them, and not because of any compulsion on my part. … I ask, Did I ever exercise any compulsion over any man? Did I not give him the liberty of disbelieving any doctrine I have preached, if he saw fit? Why do not my enemies strike a blow at the doctrine? They cannot do it: it is truth, and I defy all men to upset it.” Teachings of Joseph Smith, Chapter 24

The responsibility rests with you

Leaders are not responsible for your salvation or even your satisfaction of their leadership. They are working on their own journey too. We are to work out our own salvation with fear and trembling before God, not with complaining and complicitness before others. Elder Bednar, in “Seek learning by faith,” explains this beautifully.

Ultimately, the responsibility to learn by faith and apply spiritual truth rests upon each of us individually. This is an increasingly serious and important responsibility in the world in which we do now and will yet live. What, how, and when we learn is supported by—but is not dependent upon—an instructor, a method of presentation, or a specific topic or lesson format.

Truly, one of the great challenges of mortality is to seek learning by faith. The Prophet Joseph Smith best summarizes the learning process and outcomes I am attempting to describe. In response to a request by the Twelve Apostles for instruction, Joseph taught, “The best way to obtain truth and wisdom is not to ask it from books, but to go to God in prayer, and obtain divine teaching.”

And on another occasion, the Prophet Joseph explained that “reading the experience of others, or the revelation given to them, can never give us a comprehensive view of our condition and true relation to God.”

There is a complex relationship between subordination and revolt, which is played out in the famous Milgram experiment. The experiment is one that looks into blind obedience and how far someone will go when told what to do by an authority figure. The logistics consist of a scientist telling a participant to administer an electric shock to another participant every time they get an answer wrong. The person being shocked however is an actor and is just pretending to be physically suffering. The person administering the shock thinks the other person is actually being shocked, and the experiment showed that 60% of men would literally shock someone to death if the man in the white coat encouraged him to keep shocking.

People often interpret this to mean that people will do the most atrocious things because they were ordered to by an authority figure, but that is not accurate. The scientist had four prompts they would say in order to get the “shocker” to continue shocking. Meaning most people would get rather disturbed by the experiment and want to stop, but would keep going because they were encouraged. The first three prompts would embolden them to continue because this is what the experiment called for, but the last prompt was “You have no choice, you must continue.” 100% of the people refused to continue once they were told they had no choice!

The participants shocking stranger considered themselves active participants in the greater good of science. It wasn’t just about authority telling them what to do, but that they were contributing to a greater cause. They didn’t see themselves as passive and their decisions were fully their own. But once they were told “they had no choice” they had absolutely no interest in continuing.

Christ showed forth the example

Even Christ throughout his life said, “The Son can do nothing of himself, but what he seeth the Father do: for what things soever he doeth, these also doeth the Son likewise” John 5:19 and “Be ye therefore perfect, even as your Father which is in heaven is perfect.” Matthew 5:48 It wasn’t until after his perfect atonement and ascension that he referenced His perfect state. Can you find an example in ancient or modern history (besides Kings) of righteous leaders requiring obeisance rather than teaching correct principles and letting people govern themselves?

“We cannot teach people anything; we can only help them discover it within themselves” Galileo 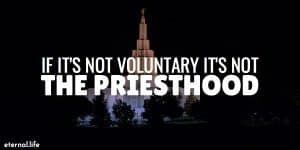 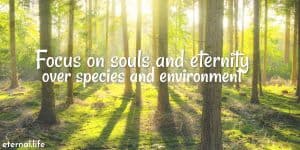