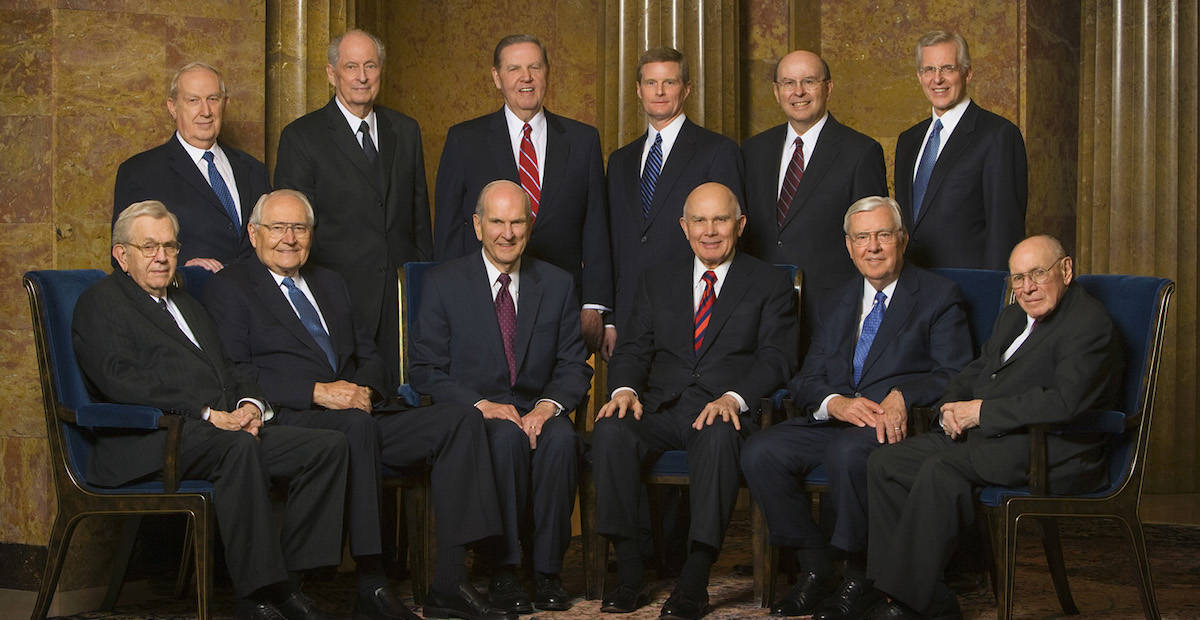 With the rapid growth of the Church and the heavy demands on the Twelve to provide leadership and administration to teach all nations, it becomes clear why the Lord has directed the building up of the Quorum’s of the Seventy. The continued restructuring reminds us of an interesting historical parallel of an episode recorded by Luke in the Acts of the Apostles.

The foreign or Hellenistic Jews in Jerusalem were complaining that their widows were being neglected and not taken care of like the widows of the native Jews. When the apostles heard of this murmuring, a significant thing happened:

“Then the twelve called the multitude of the disciples unto them, and said, It is not reason that we should leave the word of God, and serve tables.

“Wherefore, brethren, look ye out among you seven men of honest report, full of the Holy Ghost and wisdom, whom we may appoint over this business.

“But we will give ourselves continually to prayer, and to the ministry of the word.” (Acts 6:2–4.)

In other words, the Twelve told the meeting that it was not reasonable for them to leave their important office of teaching the gospel to provide for the daily welfare of the widows and serve their tables.

There were other good men who could look after these duties so the Twelve could continue to devote themselves to the charge of teaching the gospel to all persons. The result of the decision to call others to assist with the details was this:

“And the word of God increased; and the number of the disciples multiplied in Jerusalem greatly; and a great company of the priests were obedient to the faith” (Acts 6:7).

In the brief statement, we learn these facts:

In December 1978, the First Presidency and Quorum of the Twelve made a similar determination that it was no longer advisable for the Twelve to occupy their time in the details of administration of the many Church departments. They delegated seven men, designated as the presidents of the First Quorum of the Seventy, to give supervision to these details so that the Twelve could devote their full energies to the overall direction of the work, and, as directed by the Doctrine and Covenants, “To build up the church, and regulate all the affairs of the same in all nations” (D&C 107:33).

I fully believe that in the near future we will see some of the greatest advancements in spreading the gospel to all nations that have ever taken place in this dispensation or any previous dispensation. I am sure that we will be able to look back in retrospect–as a result of the decision recently made–and record as Luke did, “And the word of God increased” (Acts 6:7).

Nations are opening their doors, and the areas of the earth to which the gospel is being carried are increasing. With approximately 28,000 missionaries, more than at any time in the past, teaching is being increased. Missionaries are now extending the work to the west as far as Thailand, which leaves only Burma and Pakistan, to India, on the backside of the world. To the east there are missionaries as far as Iran, with only a short gap to India. They almost circle the globe.

From these revelations and developments, it should be manifestly evident to members of the Church that our Father loves all of his children. He desires all of them to embrace the gospel and come unto him. Only those are favored who obey him and keep his commandments.

As members of the Lord’s church, we need to lift our vision beyond personal prejudices. We need to discover the supreme truth that indeed our Father is no respecter of persons. Sometimes we unduly offend brothers and sisters of other nations by assigning exclusiveness to one nationality of people over another.

Let me cite, as an example of exclusiveness, the present problem in the Middle East–the conflict between the Arabs and the Jews. We do not need to apologize nor mitigate any of the prophecies concerning the Holy Land. We believe them and declare them to be true. But this does not give us justification to dogmatically pronounce that others of our Father’s children are not children of promise.

We have members of the Church in the Muslim world. These are wonderful Saints, good members of the Church. They live in Iran, Egypt, Lebanon, Saudi Arabia, and other countries. Sometimes they are offended by members of the Church who give the impression that we favor only the aims of the Jews. The Church has an interest in all of Abraham’s descendants, and we should remember that the history of the Arabs goes back to Abraham through his son Ishmael.

Imagine a father with many sons, each having different temperaments, aptitudes, and spiritual traits. Does he love one son less than another

Perhaps the son who is least spiritually inclined has the father’s attention, prayers, and pleadings more than the others. Does that mean he loves the others less? Do you imagine our Heavenly Father loving one nationality of his offspring more exclusively than others? As members of the Church, we need to be reminded of Nephi’s challenging question: “Know ye not that there are more nations than one?” (2 Ne. 29:7).

At the present time we are engaged in a project of beautifying the Mount of Olives in Jerusalem by a garden, in memory of Orson Hyde, an early apostle of the Church, and the dedicatory prayer he offered on that site. It is not because we favor one people over another. Jerusalem is sacred to the Jews, but it is also sacred to the Arabs.

A cabinet minister of Egypt once told me that if a bridge is ever built between Christianity and Islam it must be built by the Mormon Church. In making inquiry as to the reason for his statement I was impressed by his recitation of the similarities and the common bonds of brotherhood.
Both the Jews and the Arabs are children of our Father. They are both children of promise, and as a church we do not take sides. We have love for and an interest in each. The purpose of the gospel of Jesus Christ is to bring about love, unity, and brotherhood of the highest order. Like Nephi of old, may we be able to say, “I have charity for the Jew. … I also have charity for the Gentiles.” (2 Ne. 33:8–9.)

To our friends of Judah, we say: We are your brethren of the house of Joseph–we feel a close relationship to you. We are messengers of the true covenant and bear a message that God has spoken in this day and time.

To our kinsmen of Abraham, we say: We are your brethren–we look upon no nation or nationality as second-class citizens. We invite all men to investigate our message and to receive our fellowship.

To our brothers and sisters of all nationalities: We bear solemn witness and testify that God has spoken in our day and time, that heavenly messengers have been sent, that God has revealed his mind and will to a prophet, Joseph Smith. And, as Andrew beckoned his brother, Simon Peter, to come and hear the Messiah, we say to one and all: “Come and see.” (See John 1:35–42.)

As our Father loves all his children, we must love all people–of every race, culture, and nationality–and teach them the principles of the gospel that they might embrace it and come to a knowledge of the divinity of the Savior. Only they are favored who keep his commandments.

I know that God is our eternal Heavenly Father, and that his son, Jesus Christ, is the Savior of the world. We will receive blessings and find exaltation by following him, keeping his commandments, having love for and teaching all nations. In the name of Jesus Christ. Amen.

“All Are Alike unto God” By Elder Howard W. Hunter