The devil doesn’t have a sense of humor

The devil doesn’t have a sense of humor

The true story recounted by F. Enzio Busche about his encounter with evil spirits and possession teach us many important things about understanding and conquering spiritual evil. One lesson: the devil doesn’t have a sense of humor.

“We can find a sense of humor and the ability to smile and not take ourselves too seriously, and we can laugh at ourselves. Then it dawned on me that the adversary’s weapons are sarcasm, irony, and cynicism, but that

the Lord’s power is a gentle sense of humor.

I. Satan as literally No-thing

A. The doctrine of evil as privatio boni, the privation or absence of the Good, the satanic not being equal to the divine, so that in the strict sense we don’t believe in the devil: Credo in Deus but not Credo in diabolus: not Jesus but Michael (or else Raphael or Gabriel) as Satan’s opposite.

1. The need to make a right estimate of demonic deception, in both the political and personal worlds, Lucifer being the highest of angels, and thus the force of Darkness.

2. How Dorothy L. Sayers (in “The Other Six Deadly Sins”) does better than Lewis in revealing the social reality of the demonic. Letter V as revealing Lewis in his most problematic mode.
B. The mistake of taking evil either too lightly or too seriously.

1. Too lightly, as in our dandified demons and in the denial of death via funeral “roasts”

2. Too seriously, as in so-called Christian “haunted houses” that scare the Hell out of kids

3. The demonic result: Satan’s slickest trick is to convince us he does not exist (Baudelaire)

4. Hence Lewis’s stress on the essentially boring character of evil, as in his reading the letters in a flat midwestern American accent, unlike John Cleese’s high Oxbridge voice

C. Lewis’s recourse to satire as the best means of confronting and unmasking the Great Deceiver

1. The recourse to Martin Luther and Thomas More and G. K. Chesterton, an instance of CSL’s “mere” Christianity, drawing on the rich resources of the Christian tradition.

2. The use of names that wittily reveal the apish, parasitic, perverted character of evil, especially Wormwood, the Miserific Vision, and Our Father Below

3. Also Screwtape’s insistence on his own stuffy honor and dignity, as in a thoroughly nasty business office (Preface to 1961 ed. and Letter XI).

II. Screwtape’s desire to make us super-serious and his frustration at his own uncreativity

A. Satan’s surprisingly high regard for “the spiritual” and “inner life” (Letters II and III).
1. As in having us care about things far off rather than near at hand (Letter VI)
2. As in wanting us to concentrate on unselfishness rather than actual charity (Letter XXVI) 3. Or else in obscuring our slow slippage into Hell via the small sins (Letter XII) and religious moderation (Letter IX)

B. Screwtape’s fury at being unable to create a single pleasure (Letter IX)

1. Because real pain and real pleasure are “unmistakably real” taking us out of ourselves (Letter XIII)

2. Because God is “a hedonist at heart” (Letter XXII)

C. Hence the Satanic hatred of all laughter (Letter XI)

1. Joy—the sheer delight in being present with friends, poking fun at the world’s folly, sharing the best things with them in lubricated conviviality.

2. Fun—the emotional release of doing things with acquaintances, often frivolous things. 3. The Joke Proper—good when they enable us to laugh at ourselves and with others, potentially evil when they aim to mock and belittle others and to destroy shame.
4. Flippancy—the refusal to take anything seriously, maintaining an antic stance toward life,so as to hold everything and everyone at a distance, lest they make claims on us 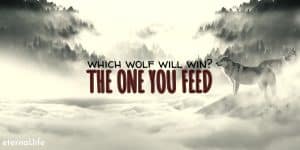 The Saint and Sinner of the Soul