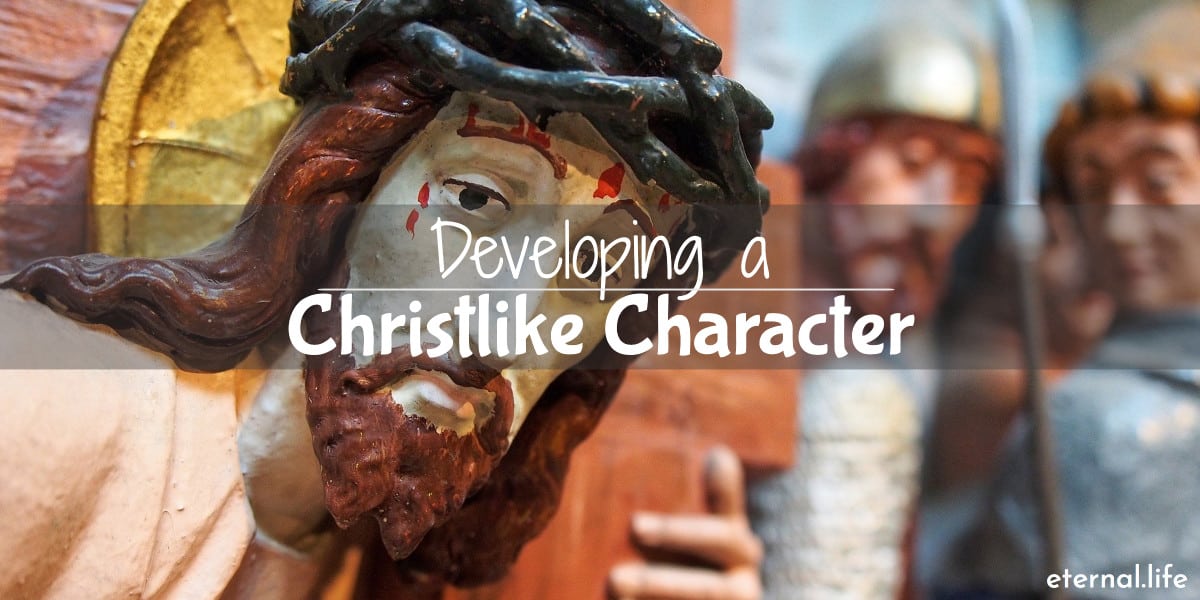 We can in mortality seek to be blessed with and develop essential elements of a Christlike character. Indeed, it is possible for us as mortals to strive in righteousness to receive the spiritual gifts associated with the capacity to reach outward and appropriately respond to other people who are experiencing the very challenge or adversity that is most immediately and forcefully pressing upon us. We cannot obtain such a capacity through sheer willpower or personal determination. Rather, we are dependent upon and in need of “the merits, mercy, and grace of the Holy Messiah” (2 Nephi 2:8). But “line upon line, precept upon precept” (2 Nephi 28:30) and “in [the] process of time” (Moses 7:21), we are enabled to reach outward when the natural tendency is for us to turn inward. Read part 1

It is interesting to me that one of the central elements of the word character is created by the letters A, C, and T.

As we already have seen in the examples of Christ’s character from the New Testament, the nature and consistency of how one acts reveals in a powerful way his or her true character. In the case of Christ, he is described as one “. . . who went about doing good” (Acts 10:38). Let me now briefly share with you two memorable experiences from my service as a stake president that highlight the relationship between our actions and a Christlike character.

Early one summer morning I was showering. My wife called to me in the middle of my shower and indicated that I was needed immediately on the telephone. (This was before the day of cell and cordless phones). I quickly put on my robe and hurried to the phone. I next heard the voice of a dear sister and friend informing me of a tragic automobile accident that had just occurred in a remote area involving three teenage young women from our stake. Our friend indicated one of the young women had already been pronounced dead at the scene of the accident and that the two other young women were badly injured and presently were being transported to the regional medical center in Fayetteville. She further reported that the identity of the deceased young woman was not yet known. There was urgency in her voice, but there was no panic or excessive alarm. She then asked if I could go to the hospital, meet the ambulance when it arrived, and assist in identifying the young women. I answered that I would leave immediately.

During the course of our telephone conversation and as I listened to both the information being conveyed and the voice of our friend, I gradually became aware of two important things. First, this friend’s daughter was one of the young women involved in the accident. Our friend lived approximately 35 miles from the hospital and therefore needed the assistance of someone who lived closer to the city. Second, I detected that the mother simultaneously was using two telephone handsets–with one in each hand pressed to each of her ears. I became aware that as she was talking with me, she was also talking with a nurse at a small rural hospital who had initially attended to the three accident victims. Our friend was receiving updated information about the condition of the young women in the very moment she was informing me about the accident and requesting my help. I then heard one of the most remarkable things I have ever heard in my life.

I faintly heard the nurse telling this faithful mother and friend that the young woman pronounced dead at the scene of the accident had been positively identified as her daughter. I could not believe what I was hearing. I was listening to this good woman in the very moment that she learned of the death of her precious daughter. Without hesitation, and with a calm and most deliberate voice, our friend next said, “President Bednar, we must get in contact with the two other mothers. We must let them know as much as we can about the condition of their daughters and that they will soon be in the hospital in Fayetteville.” There was no self-pity; there was no self-absorption; there was no turning inward. The Christlike character of this devoted woman was manifested in her immediate and almost instinctive turning outward to attend to the needs of other suffering mothers. It was a moment and a lesson that I have never forgotten. In a moment of ultimate grief, this dear friend reached outward when I likely would have turned inward.

I then drove to the hospital with a concern in my heart for the well-being of the two other beautiful young women who had been involved in the accident. Little did I realize that the lessons I would learn about Christlike character–lessons taught by seemingly ordinary disciples–were just beginning.

I arrived at the hospital and proceeded to the emergency room. After properly establishing who I was and my relationship to the victims, I was invited into two different treatment areas to identify the injured young women. It was obvious that their respective wounds were serious and life threatening. And the lovely countenances and physical features of these young women had been badly marred. Within a relatively short period of time, the two remaining young women died. All three of these virtuous, lovely, and engaging young women–who seemed to have so much of life in front of them–suddenly had gone home to their Eternal Father. My attention and the attention of the respective families now shifted to funeral arrangements and logistics.

A day or so later, in the midst of program planning and detail arranging for the three funerals, I received a phone call from the Relief Society president of my home ward. Her daughter had been one of the victims in the accident, and she and I had talked several times about her desires for the funeral program. This faithful woman was a single mother rearing her only child–her teenage daughter. I was especially close to this woman and her daughter having served as both their bishop and stake president. After reviewing and finalizing several details for the funeral of her daughter, this good sister said to me, “President, I am sure it was difficult for you to see my daughter in the emergency room the other day. She was severely injured and disfigured. As you know, we will have a closed casket at the funeral. I have just returned from the funeral home, and they have helped my daughter to look so lovely again. I was just wondering . . . why don’t we arrange a time when we can meet at the mortuary and you can have one last look at her before she is buried. Then your final memories of my daughter will not be the images you saw in the emergency room the other day.” I listened and marveled at the compassion and thoughtfulness this sister had for me. Her only daughter had just been tragically killed, but she was concerned about the potentially troublesome memories I might have given my experience in the emergency room. In this good woman I detected no self-pity and no turning inward. Sorrow, certainly. Sadness, absolutely. Nevertheless, she reached outward when many or perhaps most of us would have turned inward with sorrow and grief.

We appropriately and rightly speak with reverence and awe of young men who sacrificed their lives to rescue stranded handcart pioneers and of other mighty men and women who repeatedly gave their all to establish the Church in the early days of the Restoration. I speak with equal reverence and awe of these two women–women of faith and character and conversion–who taught me so much and instinctively reached outward when most of us would have turned inward. Oh how I appreciate their quiet and powerful examples.

I noted earlier in my remarks that the letters A, C, and T form a central component in the word character. Also noteworthy is the similarity between the words character and charity–as both words contain the letters C, H, A, and R. Etymologically there is no relationship between these two words. Nevertheless, I believe there are several conceptual connections that are important for us to consider and ponder.

Let me suggest that you and I must be praying and yearning and striving and working to cultivate a Christlike character if we hope to receive the spiritual gift of charity–the pure love of Christ. Charity is not a trait or characteristic we acquire exclusively through our own purposive persistence and determination. Indeed we must honor our covenants and live worthily and do all that we can do to qualify for the gift; but

ultimately the gift of charity possesses us–we do not posses it (see Moroni 7:47).

The Lord determines if and when we receive all spiritual gifts, but we must do all in our power to desire and yearn and invite and qualify for such gifts. As we increasingly act in a manner congruent with the character of Christ, then perhaps we are indicating to heaven in a most powerful manner our desire for the supernal spiritual gift of charity. And clearly we are being blessed with this marvelous gift as we increasingly reach outward when the natural man or woman in us would typically turn inward.

I conclude now by returning to where I began–the statement by Elder Maxwell in that special training session last September: “There would have been no Atonement except for the character of Christ.” It was the Prophet Joseph Smith who stated that “it is the first principle of the Gospel to know for a certainty the Character of God” (Teachings of the Prophet Joseph Smith, p. 345). The New Testament is a rich resource for learning about and increasing our appreciation for the character and life and example of the Savior. My prayer for each of us is that through our study of this sacred volume of scripture we will more fully come unto Him; more completely become like Him; and more fervently worship, reverence, and adore Him.

As a witness, I declare my witness. I know and testify and witness that Jesus is the Christ, the Only Begotten Son of the Eternal Father. I know that He lives. And I testify that His character made possible for us the opportunities for both immortality and eternal life. May we reach outward when the natural tendency for us is to turn inward, I pray in the name of Jesus Christ, amen. 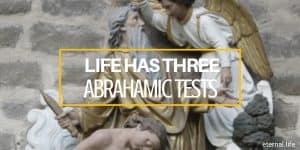 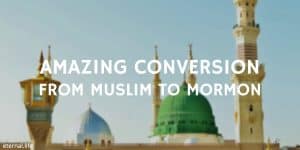 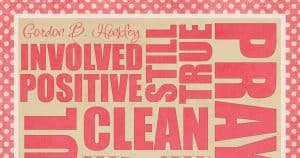