It is out of religion that the whole concept of the common brotherhood of men as the children of the same God derives, each equal before the law. So intimately are the two intertwined that democracy and the Christian religion must survive or perish together. Neither has worked perfectly in human hands. But the failure of the perfect working of the principles of free government probably is fairly in proportion to the failure of men to live the Christian religion. The perfect working of the latter would insure the perfect working of the former. We may not, except at our peril, discard either of them. Together they have provided an atmosphere in which, in spite of imperfections, we have lived and flourished as has no other nation in recorded history.

It is important to note that in those countries where freedom has perished, there has gone side by side with its decline, a breaking down and denial of the Christian religion, and in that country where the breakdown has been most complete, there has been accomplished the most thorough regimentation of the bodies and spirits of men. But a superficial, unbelieving profession of the Christian faith will not withstand the disintegrating forces at play in the world today.

Only a genuine, deep-seated religious conviction carried over into practice can do that. The disciples who established the Ancient Church were not men who rationalized Jesus and his doctrines away, nor were satisfied with proclaiming him merely a great ethical teacher. When Jesus asked his disciples, “Whom do men say that I am?” Mark 8:27 Peter gave him the various conjectures that men had ventured concerning him. Jesus then put it to him directly, “But whom say ye that I am?” Peter answered without equivocation or hesitancy, “Thou art the Christ, the son of the living God” Matt. 16:13-16 That is the kind of living faith which carried the Christian religion into ascendancy in the western world and ultimately gave to the world our democracy. It is the only kind of faith that can save the world from the unchristian doctrine of regimentation and authoritarian dominance over the lives of men.
It is that faith which it is the mission of the Church of Jesus Christ of Latter-day Saints to keep alive in the hearts of men and to perpetuate in this land.

FUTURE FREEDOM OF RELIGION AT STAKE

Another reason for the appropriateness of this discussion here is that the whole future of freedom of religion is at stake. There is war between the concept of a free people under a free government and totalitarian government with its inevitable stifling of individual freedom. That warfare involves religion. If the insufferable and inexcusable condition now prevailing is not corrected, then free government will give way to some form of totalitarianism, whether the despotism of one man or of a class or group or even of the state will not much matter. And totalitarianism must always destroy religious liberty. Free government as we have known it, what commonly is spoken of as our democracy, is foundationed in the great spiritual principle of the supreme importance of the individual and the divine derivation of the human soul.

This concept finds its highest political exposition in the Declaration of Independence which proclaims in words of fire that men at birth, by the creative’s decree that gave them being—from the mere circumstance that they are men—are God-endowed with certain rights which are “unalienable” and which of right and by force of our basic law are inviolable and which no power on earth, not even the government itself, may properly infringe. Among these inalienable and inviolable rights are the right to life and to liberty. The right of man to liberty—to be free—is thus made coordinate with the right to life itself. The history of human struggle loudly proclaims that life without liberty is intolerable. For a fulness, the two must go together. These conceptions incorporated in the immortal Declaration are the product of more than a century and a half of the teachings of the Christian religion out of which they must draw their nourishment. If this wellspring is suffered to dry up, then individual freedom will wither and die. 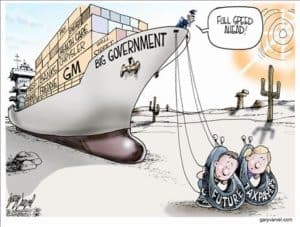