In John 14:6, Jesus said, “I am the way, the truth, and the life. No one comes to the Father except through me,” but some modern Christians aren’t quite sure about that.

According to Pew Research’s 2014 Religious Landscape Study, 66 percent of American Christians say many religions can lead to eternal life.

That sentiment is most popular among mainline Protestants (80 percent) and Catholics (79 percent).

Among non-Christian groups, Hindus (96 percent), Buddhists (83 percent), and Jews (79 percent) are most likely to agree many religions can lead to eternal life.

A majority of Muslims (65 percent) agree, while fewer Mormons (40 percent) say the same.

The least likely religious group in America to believe there are many ways to eternal life is Jehovah’s Witnesses (8 percent).

While still high, belief in many paths leading to eternal life drops among Christians when specifically asked about non-Christian faiths.

When asked if some non-Christian religions can lead to eternal life, 50 percent of Christians agree.

Almost 3 in 10 Christians (29 percent) say their religion is the only true faith and another 12 percent say only Christianity will lead to eternal life.

Historically black Protestants (38 percent) and evangelicals (31 percent) are least likely to say some non-Christian religions can lead to eternal life. In 2016, LifeWay Research found 64 percent of Americans say God accepts the worship of all religions. The one demographic holdout is Americans with evangelical beliefs, among whom 48 percent agree.

Americans are also hesitant to say non-Christians spend eternity in hell. While 84 percent of those with evangelical beliefs say that is the case, only 40 percent of Americans as a whole agree.

Contradictory beliefs about the afterlife are seemingly no problem for many Americans.

Sixty percent say heaven is a place where all people will ultimately be reunited with their loved ones, but 54 percent say only those who trust in Jesus alone as their Savior receive God’s free gift of eternal salvation.

A slim majority of Americans (52 percent) also say they partly contribute to earning their place in heaven with the good deeds they do. 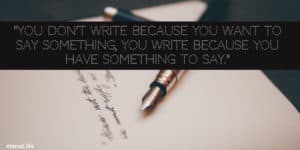 Blogging vs. becoming: why do I write?